These great reviews should come as no surprise to those who have been following this estate’s meteoric rise: today Fratelli Alessandria is unquestionably crafting the ultimate expression of Barolo from Verduno.

Just recently, the estate was named a Top 100 Winery by Wine & Spirits! We can’t wait for these wines to arrive; we were lucky enough to have tasted them this summer just after bottling, and what a joy they will be once they’re on our shores. Watch this space for more!

“Vittore Alessandria’s 2013 Barolos are stellar. That said, the wines are quite closed relative to how they showed from cask last year, which is not entirely surprising given the style of the vintage. Time in bottle is going to be essential in allowing the 2013s to come together and express their full potential. These remain some of the finest, artisan, traditionally made Barolos readers will find. Best of all pricing has not yet caught up to the quality of what is in the bottle.”

Fratelli Alessandria’s 2013 Barolo is fabulous. Scents of orange peel, cardamom, dried flowers, mint and dried cherries give the 2013 a decidedly exotic flavor profile that will only gain in sweetness and perfume as the wine ages. Mid-weight structure gives the wine considerable appeal, but readers who can cellar the 2013 will be in for a treat. Alessandria’s straight Barolo remains one of the most fairly priced wines in all of Piedmont. Don’t miss it.– Antonio Galloni

The 2013 Barolo San Lorenzo di Verduno is a big, powerful wine with huge tannins, broad shoulders and tons of overall intensity. Bold, dark flavors laced with expressive, balsamic overtones are some of the signatures. As always, the strapping, full-bodied San Lorenzo needs time to shed some of its youthful tannin, but it is impressive just the same. Moreover, San Lorenzo is one of the rare Verduno crus that emphasizes power over finesse, in the way one might say the same about Bonnes Mares in Chambolle-Musigny, for example.– Antonio Galloni

The 2013 Barolo Gramolere is the most linear and taut of these 2013 Barolos from Alessandria. Chalk, white pepper, mint and sweet red toned fruit give the wine its brightness. Intensely saline and sculpted, the 2013 plays off a real sense of energy and drive. It, too, needs plenty of time in bottle to be at its very best. Today, the 2013 pulses with energy, but the best is yet to come. Vittore Alessandria is naturally most often associated with Barolos from Verduno, his home town, but the Gramolere, from an estate vineyard in Monforte, is often one of the better wines in the range, as it is once again in 2013.– Antonio Galloni

Alessandria’s 2013 Barolo Monvigliero is a deep, sensual wine. Striking Monvigliero aromatics make a strong first impression in the classy, impeccably balanced Barolo. Pliant and deep in texture, with plenty of structure, the 2013 appears to be headed into a period of slumber from which it is not likely to awaken any time soon. Readers will have to be patient, but Alessandria’s 2013 Monvigliero is a super-classic Barolo in the making.– Antonio Galloni 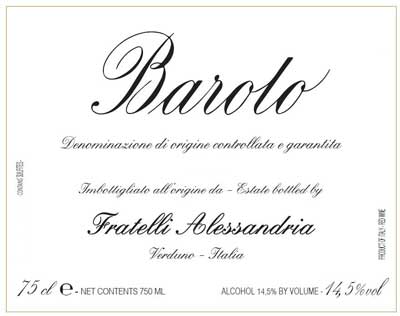